What are the effects of urban green spaces on air pollution? - Weedingtech

Air pollution has a number of negative impacts on the environment, including damage to human health and natural ecosystems. The World Economic Forum has stated that air pollution is the ‘deadliest form of pollution’, while the World Health Organization claims that in 2016 over 92% of the world’s population reside in places where air pollution exceeds health and safety limits. Despite these unbelievable facts, some countries - like the UK, US, Australia and New Zealand - are seeing a decrease in the amount of air pollution. Although urban green spaces are not solely responsible, it’s undeniable that these areas have contributed to the overall decline.

Urban green spaces relieve the effects of what is referred to as the ‘urban heat island’. The urban heat island effect appears in towns and cities that are highly populated. It refers to the heat that’s generated from houses, shops, industrial buildings, vehicles and people simply living their day-to-day lives in close proximity. Unfortunately, the buildings, pathways and roads prevent the heat from rising into the atmosphere. This means that the temperature increases within the city, sometimes by 34-37,5° F, in comparison to surrounding rural areas. 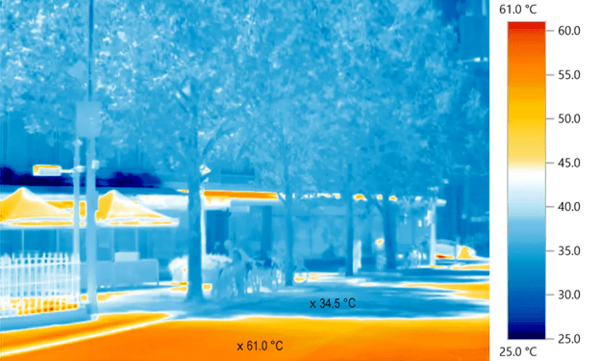 A survey conducted by Nature has determined that over three million people have died prematurely as a result of air pollution. This is due to the inhalation of irritant gases which can cause problems with airways, and worsen any pre-existing lung or heart conditions.