Glyphosate vs Foamstream – which form of weed control is right for your organisation? – Weedingtech

Glyphosate vs Foamstream – which form of weed control is right for your organisation?

Many cities and towns are still opting for glyphosate-based products as their primary method of weed control. However, following some recent changes in legislation and concerns raised in the media, some are making the step toward implementing a herbicide-free strategy in their local area by using products like Foamstream.

When it comes to choosing whether to use a glyphosate-based product or a herbicide-free alternative, it’s a good idea to compare both methods objectively to come to an informed conclusion. It’s important to look at the whole picture and all-round use.

Let’s start with the difference between the two methods.

Glyphosate is a popular herbicide which is used as a method of weed control in countries across the world.

The chemical will destroy most weeds and plants by preventing them from making the proteins they need to grow. It’s rarely used on its own but is an active ingredient in many herbicides - including the world’s top-selling weed killer: Monsanto’s ‘Roundup’. Read our article on everything you need to know about glyphosate for more information on the chemical.

Foamstream is the leader in the herbicide-free weed control market and one of the most popular alternatives to glyphosate. It’s a safe, versatile and cost-effective method which is suitable for use around people, animals, waterways and delicate ecosystems.

The solution works by combining hot water with a biodegradable foam. The heat in the hot water is the active ingredient in the process. The foam acts as a thermal blanket over the hot water and maintains the heat on the plant for long enough to kill or sufficiently damage the weed. The solution is applied using either the Foamstream M600 or Foamstream M1200 – depending on the type and size of the space being treated.

To compare the cost of Foamstream vs glyphosate, we will look at data from two studies. One data set, provided by Rigby Taylor, is based on treatment of a UK city council using a combined approach of herbicide and manual weed practices including strimming to control weed growth within Doncaster, the reference city. The second data set is provided by a London Borough, currently using five Foamstream M1200 machines.

For complete weed control of many of the surfaces in the identified areas, the results showed that treating the weeds twice a year with Roundup was not sufficient control. Manual weeding was also needed to control the areas that glyphosate was not used.

The most common number of herbicide applications required each year is often three and not two. From our partner network it has been shown that in many instances, it can be four or five applications.

With unpredictable weather patterns and high levels of precipitation (especially in the UK), if rain falls immediately post herbicide application, the treatment will not take effect on the vegetation and the herbicide will be washed away. Considering these factors, the cost per year for using herbicide is more realistically between £90k & £120k.

When used alongside strimming (which in most cases is necessary), glyphosate works out to be the more expensive method. Over five years, Foamstream is 31% cheaper than the combination of herbicide and strimming.

However, glyphosate is heavily reliant on weather conditions being suitable on and after application to ensure good efficacy. There are also an increasing number of weeds becoming resistant to it. This means that its overall efficiency may decline. If used alongside glyphosate, strimming can also be ineffective due to the disruption caused to the seedbed and spreading seeds and spores - increasing total weed coverage and causing rapid weed regrowth over a wider area.

Foamstream provides fast, instantly visible results. Heat is transferred from leaf to root, and then held on the plant for an extended period of time by the insulating foam blanket. This ensures a highly effective plant kill.

It’s important to note that variables such as size of weed, speed of treatment and time of year need to be considered - and may have an effect on efficiency. However, it’s a solution which can be used, effectively, all year around.

The below diagram presents the results of trial comparing Foamstream, herbicide and doing nothing carried out by the French Chamber of Agriculture over a three month period - tracking kill rate and rate of regrowth. 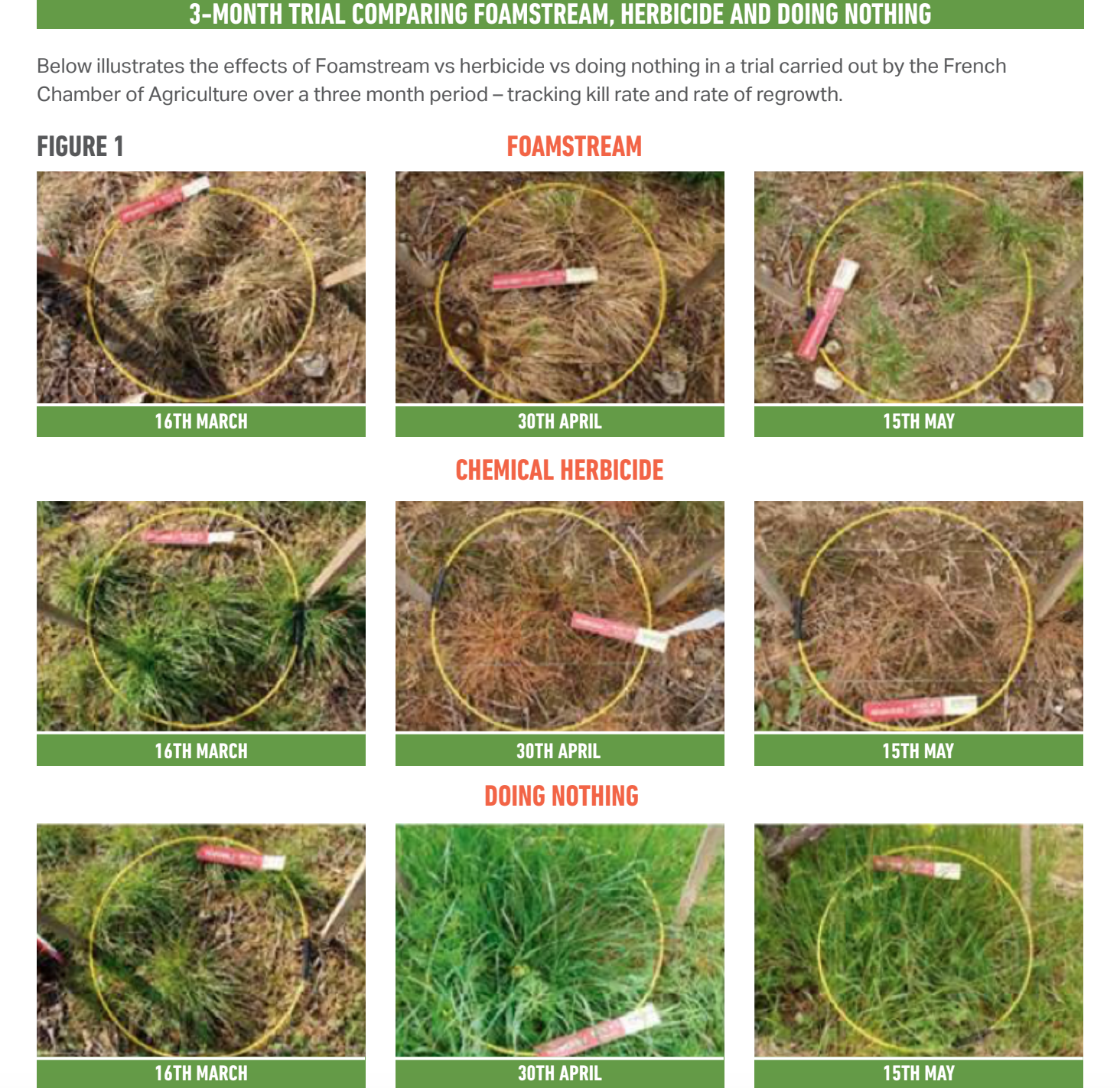 The diagram shows that Foamstream’s results are immediately visible on the day of treatment in comparison to the herbicide. By 30th April, herbicide and Foamstream have similar results. By 15th May, it shows small signs of regrowth with areas still dead – this is when the next application would be suitable for treating with Foamstream and why the importance of understanding treatment cycles is critical when it comes to vegetation management.

There is less re-growth of the weeds treated with herbicides by the 15 May - giving it an advantage in respect to short term results.

The effect of weather on application - glyphosate vs Foamstream

Glyphosate is weather-dependant so cannot be used all year around. The amount of rainfall during application will affect the herbicide’s efficiency.

The diagram (below) shows how much glyphosate is lost to the environment when it rains. 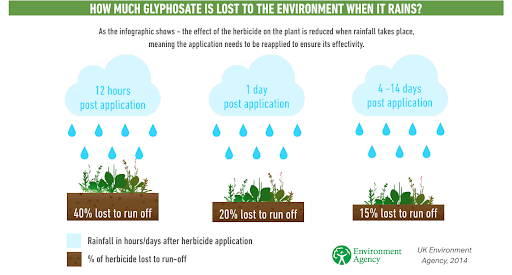 Using glyphosate when it’s windy can lead to spray drift. This can be a problem as it can pollute water, damage sensitive crops and the environment. Therefore, it’s crucial that you check the weather forecast for wind direction.

The Department for Environmental Food and Rural Affairs suggest the ideal spraying conditions are a Force 2 light breeze (3.2-6.5 km/h). This is similar to a wind which could be felt on the face and rustle leaves.

The operator must stay alert to ensure that the spray is not drifting onto non-target areas.

Weeds growing under hot conditions often become tolerant to herbicides. This is because they develop a thick, waxy layer on the leaf surface, which acts as a barrier to the herbicide absorption of the weed. The herbicide movement within the weed will then likely be reduced due to the slow rate of translocation and metabolism.

Therefore the application of herbicides under these conditions can lead to reduced weed control.

Does the weather affect the application of Foamstream?

Foamstream can be used to control weeds in all weathers, on any surface, all year round (reducing costs attributed to downtime and allowing better planning of labour resources).

The diagram below shows how the solution can be used all year round. 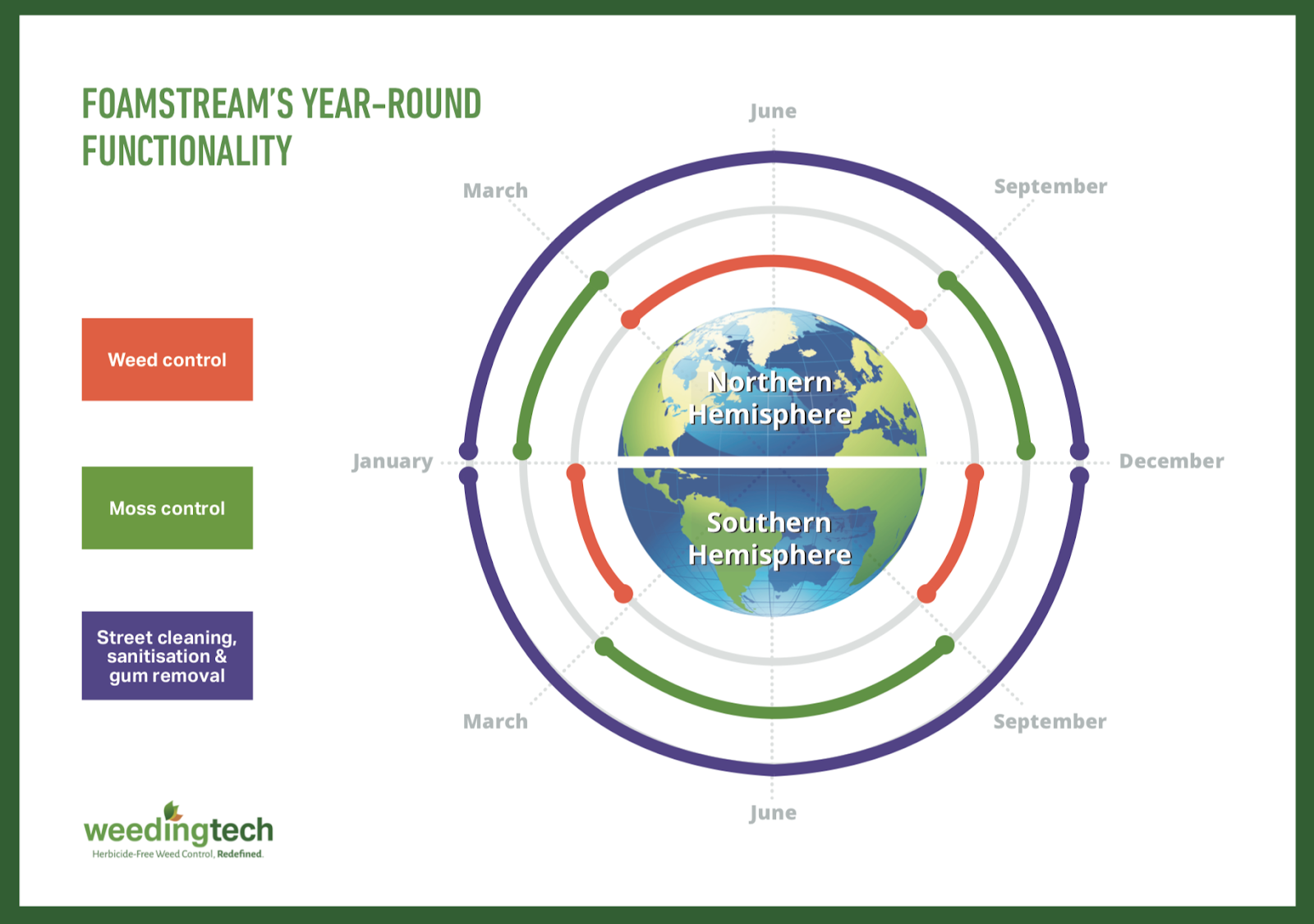 Glyphosate is under an unprecedented amount of scrutiny at the moment with hotly debated views being expressed on either side of the debate. Many cities and towns have now been put under pressure to implement a herbicide-free weed control strategy by the public who live in their districts to live in.

All over the world, those who have already implemented Foamstream as part of their herbicide-free strategy have received positive publicity for their decision, as well as positioning them as forward-thinking authorities who are conscious of resident’s health. This includes receiving positive feedback from the residents themselves on the emotional impact of using Foamstream systems:

“I was struck by the speed and efficiency of Foamstream.  What is particularly pleasant is how clean the streets look and actually feel to be in.  During treatment the streets are cleaned as well as weeded. My impression is that there is a freshening quality to Foamstream treatment. We could say this is a holistic approach to community health.” - Victoria Conran – Resident – Bonnington Square, London.

It allows councils the opportunity to publicise their borough in a positive way by supporting environmentally friendly credentials and promoting  cleaner and safer green and urban spaces for their residents.

Operators using glyphosate public spaces need to be properly trained and must be careful when handling the chemical.

Operators must wear full protective clothing including chemical protective gloves, eye and face protection, coveralls, protective boots and respiratory protective equipment. This is the minimum amount of protection required for concentrated levels of the chemical.

Additionally, operators must be certified to use glyphosate – something which adds additional on-going costs to using the herbicide.

Foamstream requires no ongoing operator certification, protective clothing or specialist training to be used effectively. Due to its intuitive operating system, councils can easily implement Foamstream with little to no training. Once Foamstream has been delivered, you’re able to immediately use the technology. Eliminating the need for specialist training, clothing and certification reduces costs often attributed to traditional methods of vegetation control

Both methods are effective in weed control. Glyphosate may seem the most cost-effective and efficient method short-term, but when looking at the cost, results and multi-functionality of Foamstream over the whole year - it comes out on top.

If you want more information about how you can implement an environmentally friendly method of weed control into your business or local area, contact Weedingtech today.

Interested in finding out more about alternative methods of weed control?