Weedingtech, manufacturer of the leading herbicide-free weed control solution, Foamstream, has expanded in to its third continent with its patented Foamstream process and machinery now available in New Zealand.

The expansion has happened in partnership with Matt Kirby, who is MD of Weedingtech – New Zealand and is responsible for setting up the Weedingtech offering in his country. This has come about as demand for herbicide-free alternatives across the world increases as public and private entities look to move away from using traditional methods of weed control like the herbicide glyphosate, in favour of greener alternatives. 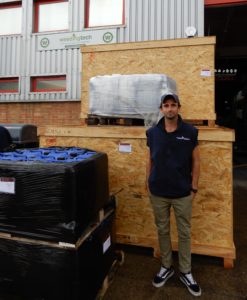 “Never has there been a better time to implement herbicide-free solutions in to public spaces. Great pressure is mounting from the public and legislation for change. The recent court ruling against Monsanto has now set a precedent across the world for organisations to carefully consider their position on their use of herbicides in public spaces. We’re excited that, with Matt’s help, we can now offer public entities and private organisations the opportunity to bring greener, cleaner and safer communities to their residents in New Zealand.”

Foamstream is a patented process which is already being used by municipalities around the world across North America and Europe by notable clients such as Central Park, NYC, City of Munich and London Boroughs of Hammersmith and Fulham. The process works to kill unwanted vegetation including moss and algae by insulating hot water using a bio-degradable foam made from natural plant oils and sugars. The foam acts as a blanket over the hot water, trapping the heat on the plant for longer and keeping it in the critical temperature zone (57oC and above) thus delivering the most effective kill of the vegetation. It also sterilises surrounding seeds and spores, leading to reduced future regrowth. Due to its highly effective process, operators need to apply Foamstream fewer times per year than any other alternative method, bringing great cost savings and labour efficiencies to the organisations using it.

Looking to move your organisation away from herbicides?

Get in touch today for more information on how to make the change to using an alternative solution of weed control in your organisation.